Perceptible – obtain knowledge of through senses, observe and understand.

He is Prakash Swaroop – form of unimaginable divine light.

He is Satya Swaroop – ultimate reality.

He is omniscient, Omnipresent, Omnipotent.

He is infinitely the highest and the greatest goal to be attained by the soul. He is almighty Supreme authority and everywhere in all souls (atma) and in all universes (Akshar and Maya).

Parbrahma, Paramatma, manifest Himself at various places in all universes simultaneously wherever He wishes without leaving Akshardham.

That which controls those who are embodied, that which is ever perfect, at Shree Purushottam Narayan (Supreme God), resides in the imperishable abode (Akshardham) in that form.

The Master controller of limitless (Brahmands) with infinite power and regulator of the liberate as well as Ishwar is that Purushottam (Supreme Person).

That Parmatma is the distributor of fruits of good and bad actions according to their appropriate desires to the liberated, Ishwars, the Gods and the human beings.

Even though regulator, He is non-attached, non-affected, infinite, free absolutely, possessed of divine body, posed of innumerable good qualities, independent and attained by many parshads and He attains the assemblies of the great liberated souls (muktas). Sitting on the divine throne He is always worshipped with devotion. The Supreme person or highest reality (Parbrahma) resides in the hearts of all as knower of inner working and he resides in Akshardham simultaneously.

He is the cause of all incarnations. His fear bring, reduces and makes, Pruthvi [earth], Jal [water], Tej [light], Vayu [air], Akash [sky] and the Ego [Ahankar], the grat Mahatattva, Pradhan (original), Prakriti; Purush Prakriti (of sankhya), Purush Akshar and the powers like Prakrti (nature), Sun, Oceans, Fire, Gods etc. attend to their respective functions and behave under His control remaining in their positions according to His Supreme Command.

By His own will He comes down on Earth to do good to Jiva to protect the path of duty. He assumes an appropriate form for the specific work to be done and does all worldly as well as divine work. 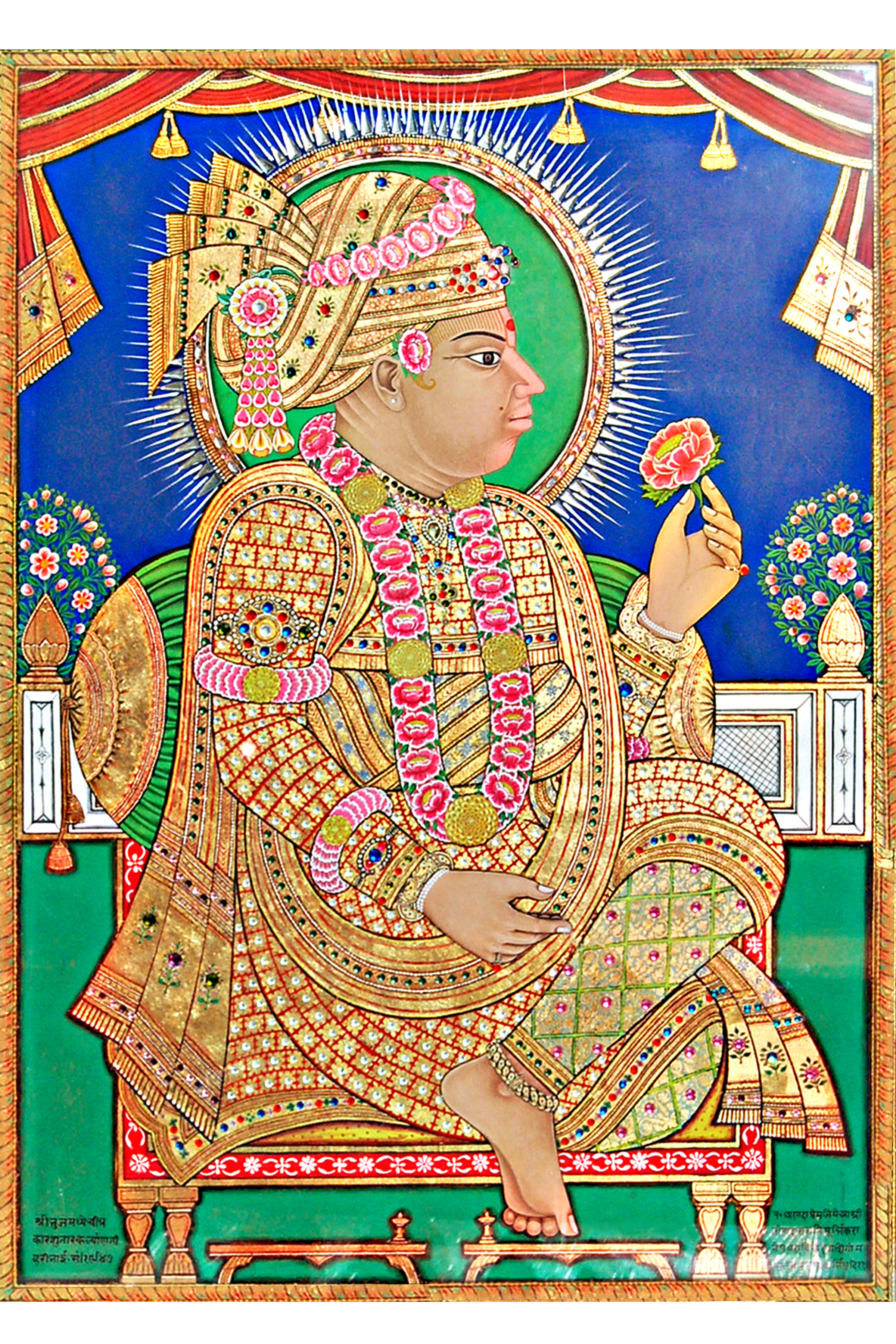 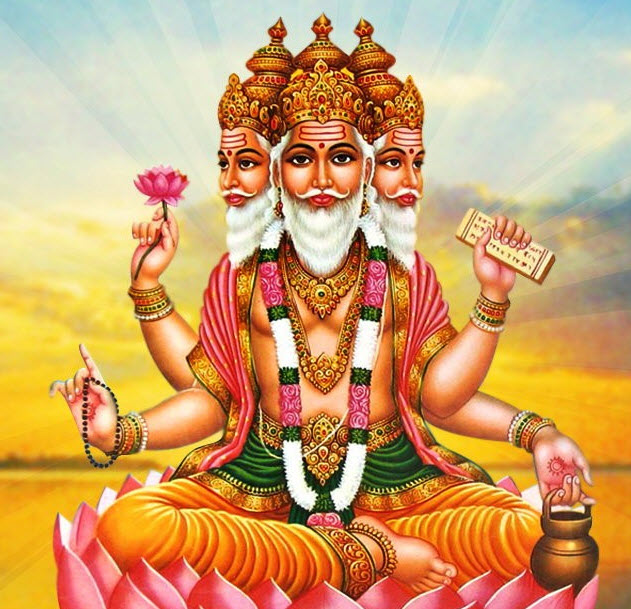 As Sakar form he is in constant service of Parbrahm Purushottam Narayan in His ultimate abode.

As Nirakar, it is divine abode of God known as Akshardham. It is the form of unimaginable man of divine light i.e. pure consciousness, which is called Chidakash or Brahma Mahol. He is endless and everywhere. It sustains all the realised souls (muktas) with Parbrahma Parmatma, as well as the innumerate universes out of the divine abode of Akshardham.

Other characteristics of Brahm are
Satya Swaroop i.e. the ever reality
Gnan Swaroop i.e the form of profound knowledge. It is eternal, pure immortal, changeless, limitless of all etc.

It has access to everything. It has form of a servant as the form of all pervading, abstract from (existing only in the mind, not concrete) which can only be seen through the eyes of knowledge.

It is infinite, indivisible, unchangeable, and hence indestructible. It is full of light and is the highest Brahmadham.

It is without limits, always without miseries, malice and attachment, it is neither weak or strong. There is neither day or night. It is full of condense light. It is beyond time and Maya (cosmic illusion)

Maya is one which constitutes the three qualities,  Satva, Rajas and Tamas. Its the incarnation of  ignorance, its the  power of our Lord and its the cause of ego and personal attachment for body psyche and everything else related to it, on part of Jiva.

[Equiliobrium state of three qualities i.e. Satva, Rajas, Tamas is called Maya]. This Maya (Prakriti) develops these three qualities out of which the world is born. Since Prakriti gives rise to this wonderful world it is also known as Maya.

Because Prakriti is opposed to knowledge it is called Nescience (Avidhya). It is Eternal (Nitya and hence imperishable). Its name is Mulprakruti and its the power of Lord.

The evolution of 24 elements described in Vedas are the results of the three qualities of Maya – Satva, Rajas, and Tamas.

She is the field for Jivas to take birth and bodies according to their actions. She is the cause of evolutionary changes.

She is the cause of the sense of “I and mine” in the body and its relations; Maya is of gross darkness, intense desire and attachment. This Maya behaves by assuming two forms of consciousness and staticity and is a shadow of all states of ignorance. It’s a Para Shakti (Supreme Power) of Shree Krishna. It causes the cycle of life and death of the Jiva and the fear among them. It also induces the sense of “mine and yours” in your body, as well as realisation of self. Maya is unborn. It is of the nature of Darkness, helps in creation and division of good and bad by nature. It is an obstacle in concentration and devotion to the Lord. Those who follow the path of penance by resorting to Japa and control of senses without devotion to Lord, are mostly defeated in their objective by the power of Maya. Those who, by their total devotion to Lord, surrender to the Lord, this Maya cannot defeat them, but Maya still remains with Jiva because of his association with worldly objects leaving aside the Jiva.

Lord Krushna said in Gita that this, my Maya, is difficult to cross, but those who take Refuge in Me alone succeed in crossing beyond it.

The whole world has come out of Maya (the cosmic illusion) that Maya is identical with Brahm, is the abode of Parbrahma. 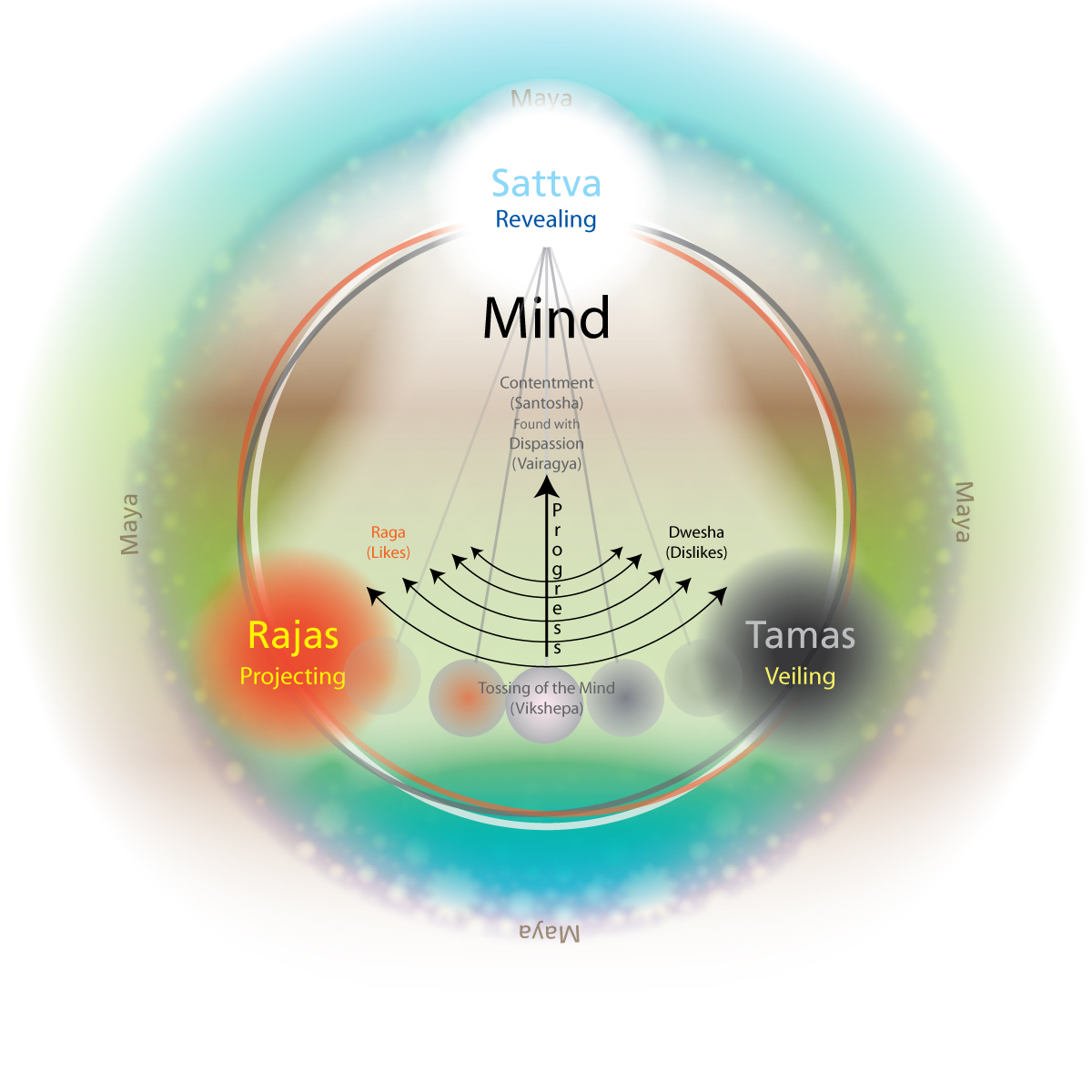 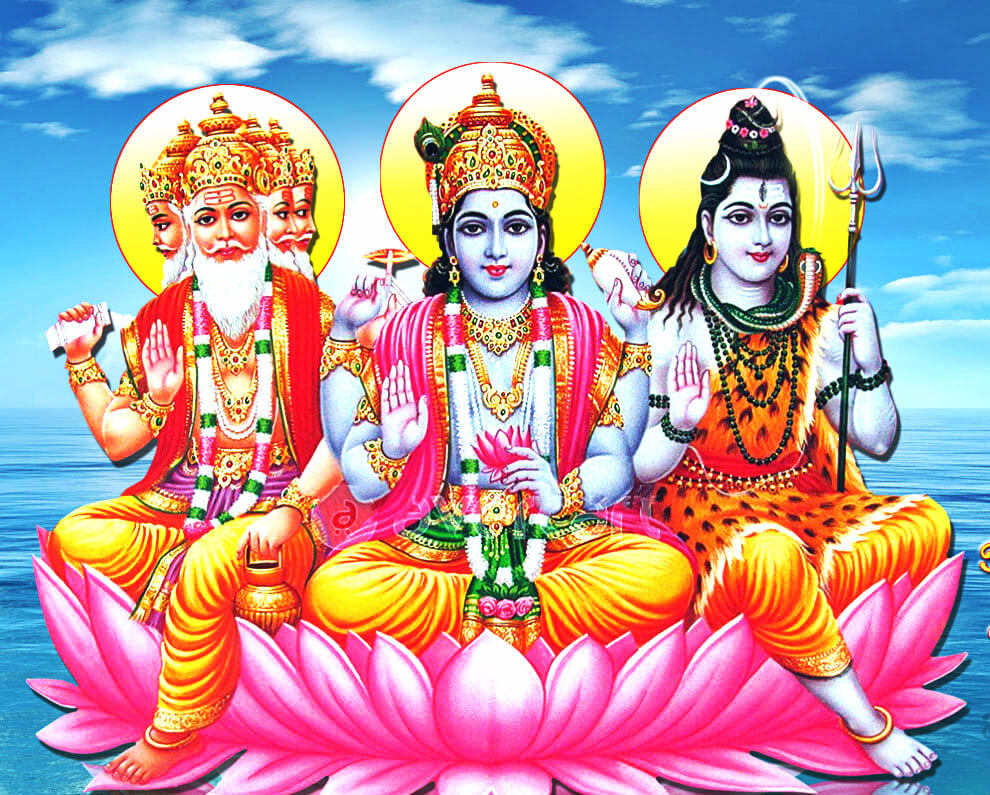 Just as Jiva is installed in the heart so does Ishwar reside in the heart of Jiva as the inner controller, is absolutely independent and is the judge supreme of all actions of all Jivas.

They have their own consciousness, through whom the creation, the substance, and destruction work of “jagat” (the universe) got done by Supreme Lord. Ishwar has three bodies Virat, Sutratma, and Avyakrut.

Seven loks below the earth – Atal; Vital; Sutal; Talatal; Rasatal; Mahatal; and Patal. All these are located in the great body of Lord known as Virat which is the gross body in which they stand

There is a subtle body of Ishwar which is inform of the actions of intelligence and senses, which run across like a thread in all that he does.

A casual body having access to every place in the universe in the form of motion. Ishwar occupies all the three and hence is pervading in his own body.

He moves everything and is omniscient. He is the controller of the universe (Bhramand). He is the Creator, Sustainer, and Destroyer. There are innumerable universes so there are innumerable Ishwars. Brahma the creator, Vishnu the sustainor and Shiva(Mahesh) the destroyer are the Ishwars. As Jiva reside in the bodyand controls so does Ishwar resides in Jiva and controls him.

Ishwar's talent and power is too much while that of Jiva is very little. The Ishwars are Omniscient, Omnipresent, Omnipotent for that Universe only.

One who resides in the heart, is alone and subtle, is also all conscious, is the knower, is pervading all over the body by means of His power and good knowledge and bares characteristics such as indivisible, invulnerability, and it eternality etc.

Individual unit having His own consciousness. Smaller than even an atom [has three different bodies gross or apparent, a subtle and the casual]. Jiva never dies, nor is it ever born. [due to its association with Maya that gets attached on the mind and finally absorbed at the time of the final dissolution in the cover of Maya]. He resides in the heart and pervades in the whole body by knowledge. [weapons can’t cut, fire cant burn; water cant drench and wind cant dry Him] He is eternal, indivisible, imperceptible, immortal etc. Jiva is bound by the actions. Jiva gets His body according to His accumulated action, good or bad. He leaves that body and assumes another one. Thus He moves from one body to another.

Shruti says that Atma is indivisible, imperceptible etc. Jiva has access to everything. Jiva is free eternally but functions are under orders from Lord and yet are bound by Maya. If he is devoted to Lord, it can be free from Worldly desires and illusory objects. By single minded devotion, by being free he can attain the abode of Lord where he may enjoy the pleasures of serving the Lord (attain liberation).

There are three types of Jiva:
1. Bound
2. Liberated
3. Eternally liberated

Eternally Liberated – Those who are devotees of Parbrahm (highest reality), they attain Akshardham (imperishable abode of Lord) and serve the Lord on Par with him (attain the same status as that of Lord).

When the soul is in “bound” condition he possessed of eight Gross qualities, they are:
Word
Touch
Taste
Smell
Vision
Power
Knowledge
Pleasure 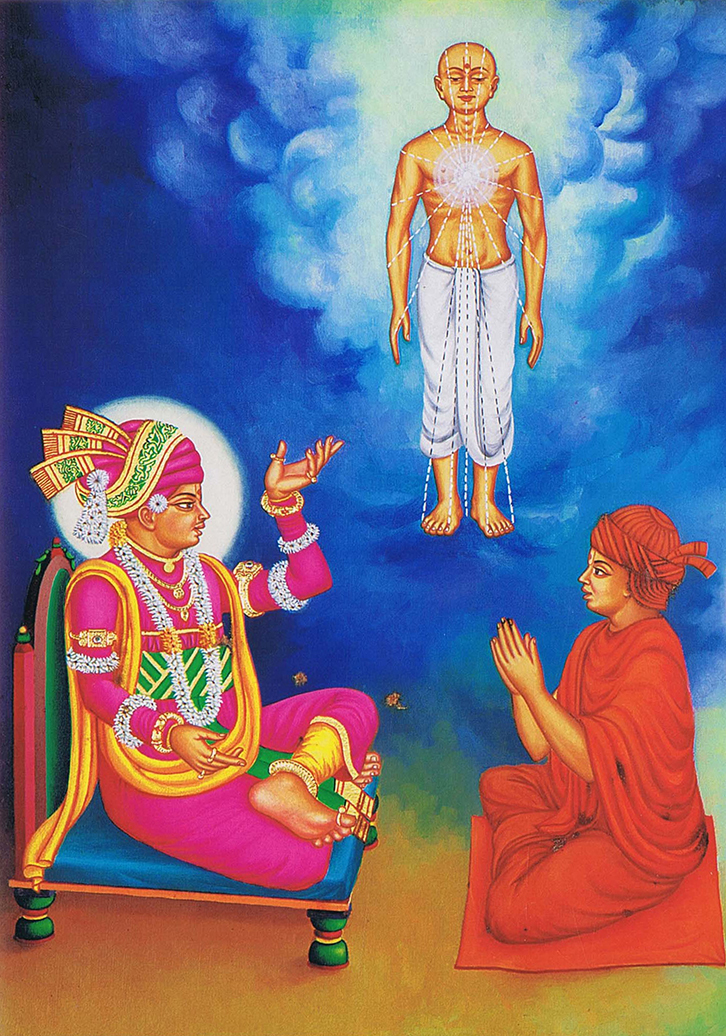