Swami Muktananda, Swami Nishkulananda and Swami Brahmananda were all poets. Similarly Swami Shukananda was also a poet. Swami Shukananda composed poems in Sanskrit. Once he decided to please Maharaj by composing some poems. He wrote some poems and showed them to Maharaj. As soon as Maharaj took those poems in his hands, he threw them in water. Other poets would feel insulted by Maharaja's act, but Swami Shukananda was not offended. He wrote other poems. Maharaj threw them into water without even reading them. This continued for some time.

A poet loves his poems as parents love their children, and if anyone neglects his poem, the poet feels offended. Shuk Muni was a poet. He considered Maharaja's wishes as his own. That's why even though Maharaj neglected his poems, Shuk Muni never felt insulted. This is called devotion.

What do you think is the reason of Maharaja's throwing away all Shuk Muni's poems into water? [it was to find out whether Shuk Muni is displeased or not. If he feels offended, it will be a defect of a sadhu. 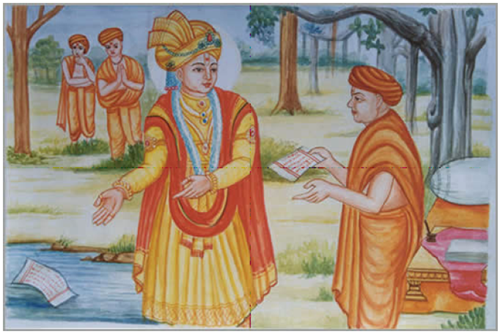