It was the silvery night of the FULL MOON DAY of the month of Posh [third month of Vikram year]. Nilkantha Varnee was entering a dense forest. It was a dreadful forest twelve miles long. Whoever would enter, would never return. So the king had posted a guard to disallow an entry into the jungle. But Nilkantha Varnee was a person who took pleasure like a fish swimming against the flood. He would run faster where the danger was greater. He entered the forest. He crossed it and began to ascend the mountain, Nine lacs of Siddhas were performing penance on the mountain. Hence the mountain was known as the NAVLAKHO PARBAT. A fire was kept constantly burning in a fire-pit by these Siddhas.

Nine lacs! But still there was not the slightest stirring. All of these Siddhas were motionless like wooden statues. Varnee entered at a stretch into their meditating trance. He asked, “O Siddhas, why do you perform this penance? Have you any aim behind it?” “We want to be immortalised bodily” replied the siddas. “I considered you all highly intelligent and I thought you are waiting for some divine appearance [DIVYA DARSHAN]. Where as you consider this body of bones, flesh and blood more important. O my dear sadhus! This body is a prison of soul.

How strange it is that you take pleasure in imprisoning the soul in your body, instead of emancipating the soul from the body! Is this your aim of undertaking so hard a penance? It is like to jump down from a small pit to a deeper and great pit” All the nine lacs of Siddhas had an abrupt knowledge that they had gone astray. They folded their hands before Varnee and said, “Then tell us what to do.” “Care more for the soul than for the body,” advised Varnee. “What is the means for that ?” asked the Siddhas. “Satsang is the means, Removal of ignorance is quite impossible without SATSANGA. So always be in SATSANG,” replied Varnee. All the Siddhas willingly obeyed Varnee. Thus Varnee showed the real path to emancipation to those nine lacs Siddhas. 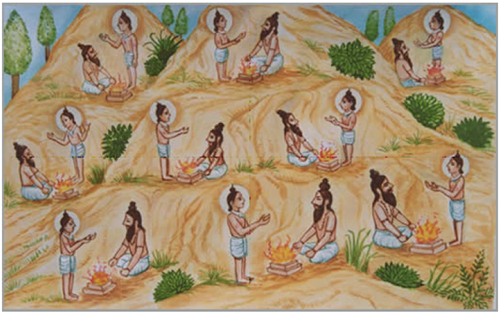