Much effort has been taken by saints and poets in describing Shriji Maharaj's form and its painting. Similarly, painters too, have reached the climax in painting Shriji Maharaj's images. Poets created quite new literature of Swaminarayana. Similarly painters have created typical art of Swaminarayan paintings. Among these painters, there are saints and devotees too. Among these devotee-painters, Naranjee Hirjee Suthar of Bhuj-Kutch is one of them. The well-known vaishnava Sunderjee suthar was his uncle. Narayanjee was the painter to the king of Kutch. Maharaj called him and ordered, “Bhaktaraja, you are an expert at making idols, and that is why I have called you here. Prepare a mould of RadhaKrishna and mine that is to say of HariKrishna. I want to propagate the idol-worship among the vaishnavas”.

Narayanjee carried out Maharaj's command. Within two months only he prepared three silver moulds, one containing Maharaj along with RadhaKrishna, second Maharaj along with Bhaktimata and Dharmadev, and the third of NarNarayanDev. Thereafter, these pictures were printed on papers as per Maharaj's famous profile is the creation of Narayanjee. Pictures were thus printed with the help of moulds. Then handing over these pictures to devotees, Maharaj said, “Bathe daily in the morning and worship these picture-idols. Go round it (make a Pradakshina). Prostrate yourself before it and ask for “O Maharaj, guard us against bad company”. Never doubt how can these paper-paintings guard you against bad company. I will tell NarNarayan, “O Maharaj, permanently reside in the picture-idols given by me”. I will affectionately force NarNarayan Dev to reside within the picture-idols. Therefore be sure that these picture-idols are NarNarayan Dev Himself. Narnarayan Dev will certainly reside in these idols till the time you worship. This is my command. Believe it firmly”. Thousands of these picture-idols have been distributed by Shriji Maharaj Himself among his devotees. Temples with domes constructed by Maharaj were installed with marble-idols but wherever temples without domes (Hari Mandir) have been installed with these picture-idols as the offerings of Shriji. Such temples are known as Hari Mandir.

Shriji Maharaj encouraged the art of printing and sculpture. Hundreds of years after restarted the building of temples with summits, had been similarly, none has encouraged so much, the art of engraving on wood, wall-paintings, canvas-paintings, capola-paintings, as did Maharaj. Narayanajee constantly sat before Shriji Maharaj, studied all typical and distinctive characteristics of Maharaj and painted his picture. This devotee-cum-painter was so much engrossed in Maharaj's image that Narayanjee could visualize Maharaj even without his presence. There is an account about this fact. Once Narayanjee was preparing Maharaj's idol, and Maharaj was sitting before him. Maharaj usually gave him full time sitting. Maharaj's meal was also bought there. Narayanjee minutely

observed different parts of body and facial features of Maharaj and painted his picture. While this painting was in process, Maharaj had to go to Vadtal for some festival. Idol was still not complete. So Maharaj ordered Narayanjee to go on with the idol-making.

“How is it possible? you are going away” said Narayanjee. “Where am I going? I am not going away. I am within you. Meditate on me and continue your work”, said Maharaj. Narayanjee understood the meaning and thought, “Maharaj is very much pleased with me”. Narayanjee meditated on Maharaj's physical form and prepared a beautiful idol. Thus, he went on preparing Maharaj's pictures. The best picture-idols are even to-day installed in SUKHSAYYA at the Swaminarayan Temples of Ahmedabad, Bhuj, Muli and Gondal. There are many small pictures painted by him and they are meant for daily worship. There was another painter named Kadia Roopa Kachar. His paintings are still present in the Swaminarayan Temples of Ahmedabad, Muli and Junagadh. Moreover, there were many such painters and their paintings are also well-known.

Maharaj has thus encouraged natural talent lying within a devotee, as there were poets among saints, there were painters too among saints. There were sculptures and architects. And their talent has been abundantly utilized in the service of Satsang. One of such saints was Aadharananda Swami. He was a painter and poet too. He has drawn many nice pictures of Maharaj. The canvas-painting of Maharaj's horoscope prepared by Aadharananda Swami is one of the most wonderful pieces of art. That canvas-painting is 150ft long. This cloth painting is well preserved in the Ghadhada Temple. Shriji's painters have painted beautiful pictures in copulas, domes and walls of temples of Ahmedabad, Vadtal, Muli, Gholera and Ghadhada. The dome-paintings and copulas-paintings at Ahmedabad, and Ghadhada are the best specimens of wall-painting-art of Gujarat. When this painting-work in the temple of Vadtal having been finished, once Shriji Maharaj took round to see this art. Dome-painting was going on at that time. On seeing the pictures Maharaj was too much pleased that he honoured the painter by giving him a turban, a shawl and a golden chain. Thus Maharaj was second to none in appreciating painters and artists. Acharya Shri Viharilaljee Maharaj himself has narrated this incident in “SHI HARI LEELAMRIT GRANTHA”. Scholars have praised these paintings by the vaishnavas and the saints by naming the art as Swaminarayaniya Painting.

The commandment of the SHIKSHAPATRI-54

Bow down with devotion before the idol or the picture of Radha-Krishna, and chant the Krishna Mantra as far as time allows; then go to attend secular duties. 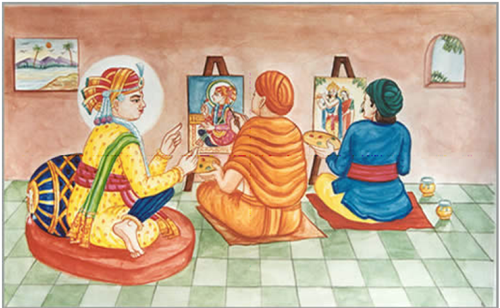