There is a small village named Nardipur in north Gujarat. There lived a follower of Shreeji Maharaj. His name was Tribhuwan but everyone called him Tita Bhagat. He used to sing Bhajans (prayer), when in the house, but even when he was out of his house, he kept on singing Bhajan. So people laughed at him. Once in the days of Holi, Tita Bhagat came out of his house singing Bhajan as usual. Mischief-mongers had a chance. They caught him. They besmeared Bhagat's face with black colour/mud of Holi, put around his neck a garland made of brinjal and then placed him on a donkey's back.

There was an uproar. The mischief-mongers went in procession with Bhagat riding the donkey's back in the whole village, sprayed colours, beat drums, and shouted slogans of Bhagat. But Tita Bhagat kept on singing Maharaj's bhajans while seated on the donkey's back. At last the mischief-mongers were tired and took Bhagat to his house. Bhagat's wife felt very much when she knew that the people insulted/offended her husband in such a way. Her eyes were full of tears, “Why do people insult such simple man ?”, wept Bhagat's wife. Bhagat replied, “None has insulted me. On the contrary they took me in a procession placing me on an elephant's back.”

“It was not an elephant that you rode, it was a donkey,” said his wife. Bhagat smiled and said, “What of that? Both are animals. Even Maharaj himself advised us that we should be pleased and satisfied in every condition - if we are placed on the donkey's back. We should be equally pleased and satisfied as when we are put on the elephant's back. Then why should we think otherwise? Moreover these mischief-mongers spent a lot after me - sprayed colours, beat drums, garlanded me with a brinjal wreath. What a pleasure they got! Many heard Maharaj's bhajans sung by me! Oh! God!”

Saying this, he took off the garland made of brinjal from his neck and smilingly said to his wife, “Brinjals are quite fresh. Wash them with water a little and use them. We got vegetables for four days. God is great !” Then he began to sing:

Never renounce Lord Krishna's worship for the fear of libel of the fool. 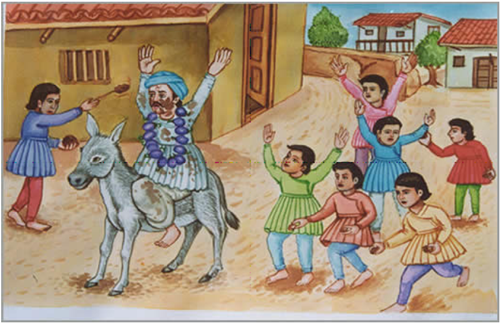